All right then, I'm ready to call this crafting slump officially over.
I'm back on the bandwagon, making up for lost time by finishing up a little gray's Little Things to Sew-Along project for December. With a bit of a twist. 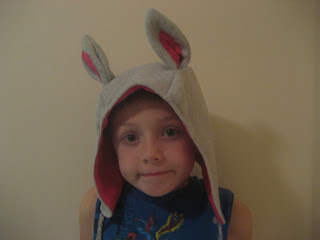 Poor Mr. Man. Someday in the not-too-distant future he'll probably hate me for these photos.

But they're hilarious.
You see, Mr. Man has a one-man-show classroom production coming up. Each kiddo in the class was responsible for memorizing a beloved piece of children's literature/story and then reproducing the story in front of the class using one prop. Mr. Man (obviously) picked The Three Little Pigs. 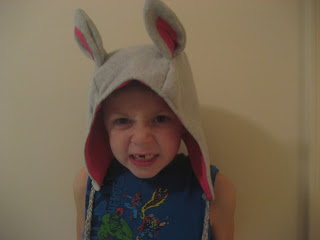 He requested a full-on Big Bad Wolf Costume, but I told him that, being short on time, what if we just did the head? And, then we brainstormed a bit. Okay, I brainstormed, he played Legos, but the result was a slight alteration of the Cozy Winter Hood from Little Things to Sew. 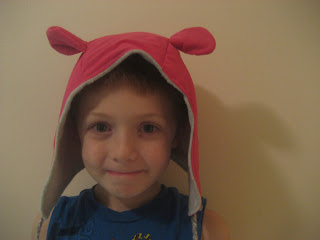 The only alterations I made to the original pattern in the book were to make the hood fully reversible and adding a second set of ears on the "pig side" of the hat.  I braided up some gray yarn from my stash, rather than using ribbon for the dangly ties. Mr. Man insisted ribbon was "girly". I hate to break it to you, kid? But you have a pig hat on. Ribbon isn't gonna make it worse... 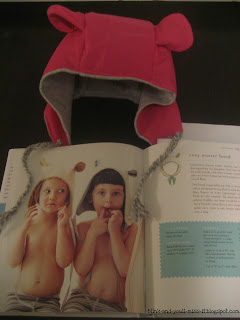 Because I cut both the pattern transfer and my materials all out a few nights ago, construction was simple and smooth and really enjoyable. In just about an hour I had completed the whole thing! 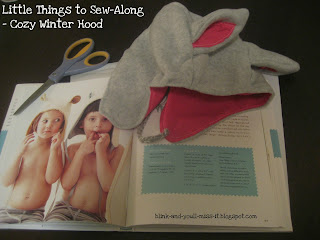