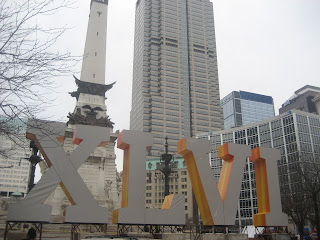 Downtown had been buzzing for weeks now with actual Super Bowl set-up going on.
Constructions is heavy in and around Georgia Street and they've started taking major arteries through Downtown down to just  a single lane or two in some areas.

So DO NOT park in the Moon Garage at Circle Centre Mall. You know, the one that spits you out onto Georgia? Just don't. Trust me on this one. 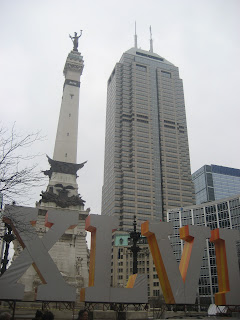 And for each person I've heard say "I'm not going anywhere near Downtown on Super Bowl Weekend!" I've heard four more than that hatching plans to come Downtown not just over the weekend, but on weeknights and random afternoon lunch-hours to check out all that the Big Event has to offer. What? People in Indiana going out on a weeknight? In February?! Amazing. 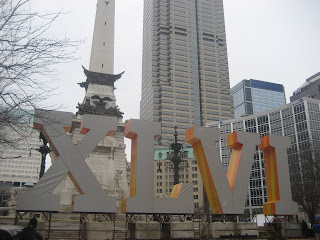 There's so much to do that doesn't cost a dime, that I'm planning on schlepping The Munchkins out and about all weekend to see what kind of Super Bowl Mania we can get into. 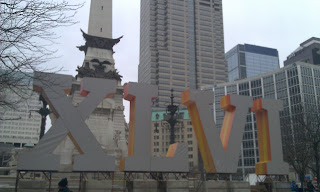 I'll try and do a roundup next week of Not-To-Be-Missed spots and photo ops...in case anyone else wants to try and experience a bit of the Bowl without facing game-day crowds. 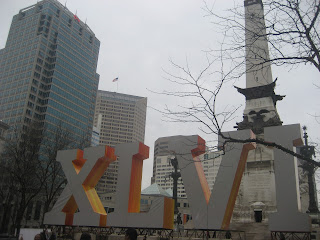 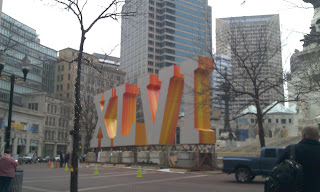 So...Um...Who can guess what I did on MY lunch break today?
I might have just maybe frozen my tush off walking over to the Circle, just to be jostled by swarms and swarms of people desperately jockeying for positions to take "THE"  photo of the day: Giant Roman Numerals have found a home nestled just to the south of the Soldiers and Sailors Monument on the Circle Downtown, and you can't go more than six inches in any directions without bumping into a news crew or a professionamateur photographer.  Awesome.
Posted by caralyn at 1:12 PM

Email ThisBlogThis!Share to TwitterShare to FacebookShare to Pinterest
Labels: Downtown Indianapolis, Super Bowl, Super Bowl XLVI, What to do Downtown