Sometimes support, a smile, a kind word, a random Dylan(esque) reference and strange M.Ward videos with Chinese Subtitles can come from the most random of places and blindside you with kindness...
Currently listening:
Sky Blue Sky
By Wilco
Posted by caralyn at 4:42 PM No comments: Links to this post

Check us out!
The kids and I slogged our way through the mud, the crowds and the mounds of dog poo to support and visit with "Winnie" the beloved pup of my brother and his girlfriend...
The kids absolutely had a blast! 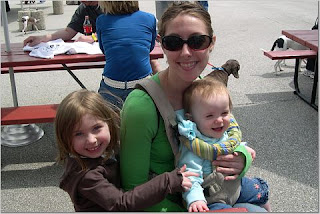 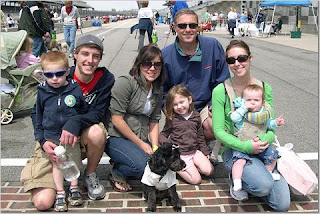 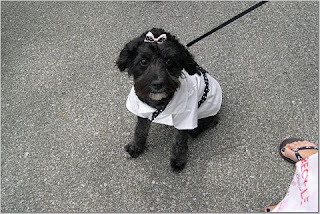 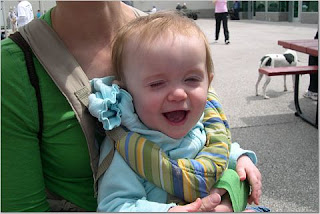 Posted by caralyn at 12:58 PM No comments: Links to this post

From Kalamazoo to Timbuktu... 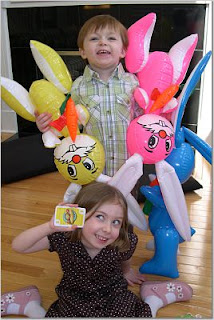 From Kalamazoo to Timbuktu...
or...how growing up is harder than I thought it would be...

This was not how my life was supposed to go.
I was the one in college secretly pining for the house with white picket fence, 2.5 kids and a dog while galavanting around from party partner to party partner. I was the one that ultimately had no problem subsuming my pie-in-the-sky ideals and whimsical what-ifs for a happy little family and three beautiful little...surprises. But, somewhere after "I do" and before "Irreconcilable differences", things fell apart. And it seems like that's happening more and more often these days. [insert relevant divorce statistic here - Upwards of 50% of all marriages end in Divorce according to the National Center for Health Statistics. There were 2,230,000 in 2006. The marriage rate was 7.5 per 1,000 total population. The Divorce rate was 3.6 per 1,000 populations based on 46 reporting States and D.C. Statistics follow suite up through July of 2007. [*http://www.cdc.gov/nchs/fastats/divorce.htm] The numbers are climbing, and I'm not sure what that says about our society as a whole. But I do know those numbers now include me.

So what do you do when you once you realize life goes on? Because it does. Whether you're ready for it or not, life goes on.

You uncurl yourself from the fetal position on the living room couch, in the shower, under the dining room table, wherever you'd tucked yourself away for a good old-fashioned meltdown. You get dressed. You get the kids dressed. You shoo them off to their respective daycares, offer up a quick prayer to the deity that is the Starbucks Double Half-Caf. Venti Moccachino and head into another day.

The challenge, for me at least, seems to be digging myself out from under the layers of wife, mother and diaper pail-changer.

As much as most single mothers out there would like to martyr themselves to their children, it's time to stand up and ... well ... grow up. I've become quite the little project-starter over the past year. Here's a quick overview ... a user's guide surviving the dark thoughts and nasty silences that creep in when you least expect them, and perhaps becoming a better person because of it.

Projects I've started since my divorce.
Idle hands are the devil's workspace...or more accurately in my case the playground for self-deprecating and blameful thoughts, mild to moderate panic attacks and acute cases of false phobias leading us back to, you've got it, an evening in the fetal position on the couch.

Letter Writing: Lately I've come back to letter writing - you know - the kinds without typing and computers; using actual stamps, etc. Of course, with any good hobby, this also necessitated feeding my other love - shopping for random and ultimately unnecessary products. I've purchased five new patterns of stationary (some with matching envelopes and some without) several nifty new pens, note cards, envelopes, assorted stamps and stickers, and a handy little lap desk box in which to store it all in. I've written maybe 5 or 6 letters, but it makes me smile to see the box sitting out, making it appear as if I am, truly, a letter writer. Caveat: this was mostly self-serving in that I assumed if I wrote letters to long lost friends I might get some mail back...it rarely happens, although I have seen some lovely, heartfelt emails in response.

Knitting: The goal of which is to sit calmly, and devote myself to the rote and ritual of keeping my hands busy. I’ve managed to curse my way through hundreds of dropped stitches, awkward purls and pulled out projects due to improper storage. This also fed my need to buy "the new" as I quickly endeavored to collect a basket/container, several sizes and shiny metallic colors of knitting needles, and far, far too many spools of yearn. I have a rainbow of colors and textures just waiting patiently to be worked into scarves, socks, baby booties, nifty vests and tacky cardigans. To date I've finished one horrendously atonal scarf, half of a set of mittens, and about 20 little square of fabric. I like to think of these little squares as my training... I don't plan on doing anything specific with them, as yet. It's the process, rather than the end result/project, that fascinates me. Look! I'll make a knot here, wiggle the needles a bit here...and viola! I'm knitting!

Reading: I've found that in the evenings, after the kids are abed and I'm forced to decide between Family Guy reruns, Leftover birthday cake mushed up with my vanilla ice cream, or diving into a new book; more often than not I've been choosing the book lately. I've always been an avid reader, gobbling up pretty much anything I can get my hands on. But lately, as cliche as it sounds, I've been delving into the [gasp!] self-help section of the library. And so my reading list looks something like this: "You Suck" Chris Moore; "Momma Zen: Walking the Crooked path of Motherhood" Karen M. Miller, "What is the What" Dave Eggers, "Eat, Pray, Love" Elizabeth Gilbert. I'm a ping pong ball of good fiction vs. self help and back these days, but it’s a quick transition from real life into my habitual escapism when I crack a new spine. A new book holds such promise, such optimism, that it’s often preferable to the day-to-day drama.

Cooking: Note of importance here - I've NEVER been much of what you might consider "a cook" In point of fact, my family still loves to tell the story of the time I tried to make a batch of cookies for the 6th grade bake sale and ended up burning the cookies, a hole in the carpet in our kitchen (who puts carpet in kitchens anyway?) and my arm, in the pattern of pair of sunglasses, all within seconds of each other; at nearly ever massive family gathering we attend. And, also to be noted, my husband did nearly ALL of the dinner prep while we were married. It's only within the last year that I've really donned a toque in the kitchen. I've quickly become a fan of: making meals ahead. If you're going to cook, might as well trash the kitchen one or two days a month and stock the freezer for easy access and prep upon crossing the threshold of the back door (because that's the moment in which my kids expect dinner to be ready). Also...I just ADORE cookbooks. All those pretty pictures, happy smiling diners...they make it look so easy. And so I've developed quite a collection of the things. I've almost an entire shelf full of them. Oh, don't get me wrong, we still swing through the McDonald's drive thru for the kids’ happy meals and my double shot of sweet tea at least once every couple weeks. And I'm fairly certain my oldest has memorized the number to China Dragon. And the overspill of HotBox pizza cups has taken up residence in the Tupperware drawer. [yeah...I have an entire drawer devoted to the stuff...what of it?]. So please don't nominate me for the Betty Crocker hall of fame just yet. But cooking has become, through sheer dedication and dint of will, a fun little experiment, and an easy way to get the kids involved. Baking is a math lesson just waiting to happen for my 2 and 4 year old, and the 9 month old will happily sit on the floor banging pots and pans…etc.

Yoga: I've been an on-again-off-again yoga practitioner since college. Okay, mostly off-again. But on the nights I couldn't sleep or the mornings that I had to be up with the baby and it just plain didn't make sense to go back to bed an hour before my alarm would go off anyway... it was comforting to fall back into my practice. Plus - Yoga unlike Tae-Bo is a quiet practice and unlike running (my exercise of choice) does not necessitate my leaving the house to complete. I've found a pleasant quiet moment or three while contorted into some asinine position attempting to breathe. The quiet moments here don't panic me. They don't send me flying to my happy place to avoid the onslaught of "how the hell am I going to survive another day?". I'm forced to concentrate inward for strength and balance - two things my life can definitely benefit from.

Tai Chi: Pretty much echoes the above...plus it comes with comfy little black loafers that I can sport around the house on the weekends. They're my 'Chi Shoes" as Isabelle is fond of calling them. And make great bedroom slippers in a pinch. I know, I know, Master Chen would be so ashamed.

Running: You know, you'd think that with the anger that usually accompanies a split, a breakup, a divorce, that I'd be hearkening back to some of my more contact-sport-related past. But oddly enough it's the solo endeavors that have become appealing again. Running I've always done. My dad's been a runner since I can remember and my sister or I would often accompany him on neighborhood jogs while he trained for any of the dozens of Mini Marathons he's completed. Both my sister and I took up running, but while she did so competitively, I sort of did so for the pack mentality. Running is one of those sports that simultaneously allows you to exercise en masse and complete the mental to do/grocery list...which brings us to my next point.

Making Lists: I'll be the first to admit. I might have a problem. In the beginning stages of my separation I made lists like a maniac. I filled notebooks full of lists for everything from trips to the grocery to the order in which I should clean the bathroom. See? A problem I know. But I shaved three minutes off of my cleaning regime due to one list, and my home inventory has never been so complete. Lists, much like all of the items on my project list, give me the illusion of completion, of permanence. And, it must be said, that one of my prized possessions is actually an old grocery list my grandmother made pre-trip on the back of an old envelope. So I blame genetics completely and totally for my manic and obsessive behavior here.

Perhaps you’ve noticed the common thread in all of these new and renewed hobbies?
At a time in my life where I feel like the bottom is dropping out I’ve reassigned my energies (what little there is left after the daily rituals of raising two toddlers and an infant) to those things which I feel that I have concrete control over. I need a sense of completion, of fulfillment in anything I choose to do. Compulsion tends to breed compulsion in my life, and while you’re not likely to find beds made or floors spotless in my house, I’d like to think that I’m reinforcing positive behaviors (you know, beyond that whole fetal position melt down thing) in my kids and in myself…
Posted by caralyn at 12:12 PM No comments: Links to this post