I woke up in a cold sweat in the middle of the night after a particularly horrifying nightmare last night. I hadn't had one of those in a while. I dream often enough, but only when I'm stressed out or unsure do I have these truly whoppers of a nightmares. Is that even proper grammar? probably not.

Regardless, I had a million thoughts buzzing around in my head and the ripples of the nightmare were clinging to the edges of my consciousness and refusing to dissapate like good little bad dreams...

And, in the unsilence of la casa I could hear the rattling of the boychild's nighttime breathing.

They all have a night rhythm, The Munchkins. The Monkey tosses and turns and breaths slowly and deeply through her mouth. The Biz sleeps like a rock. I don't think that girls twitches once all night. And Mr. Man? He wheezes. And coughs. And rumbles. It's like having a little preview of what he'll sound like as an 80 year old man. And at that particular moment it was a very welcome sound.

Andso, in a moment of pure insecurity, I crawled out of my bed, padded down the hallway and crept into bed with Mr. Man.

I remember when The Munchkins were smaller they used to wake up for one of a dozen different reasons, and make their way silently to my bedside. They'd just stand there, breathing, inches from my face, until I'd wake up with a start. It's a particularly terrifying way to be woken up and never really seems to get any easier. And inevitably I'd greet the sun with one, two, or even three Munchkins curled up in bed with me. A little watercolor montage of these scenes flashed through my mind as I wrapped Mr. Man's Yoda quilt around my legs and curled into his bed, nudging a five foot stuffed Optimus Prime out of bed in the process.

When did it happen? When did it start? Somehow, between losing teeth and skinning knees and starting school...my babies aren't babies anymore. Even The Monkey has shed the last of her baby fat this year, her spindly arms and legs covered in playing-outside bruises. Her face thinning out into big-girl smiles and wide eyes.

It happens so fast, the growing up. It's why I never stressed letting The Munchkins crawl into bed with me when they were younger. Don't get me wrong... Everyone always started out in their own beds, but nightmares and thunderstorms and lost toys were all equally acceptable reasons to pile into mom's bed at some point during the night. Because I knew, deep down, that there would come a day when they'd stop needing me in the middle of the night.

I just didn't know that I would find myself needing them just as fiercely at the same time...

Posted by caralyn at 11:13 PM No comments: Links to this post

Sometimes, I dream with my eyes open 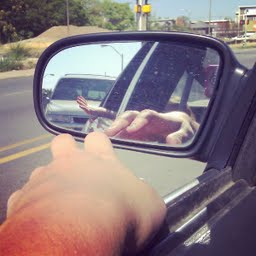 The Monkey:  "Momma, Sometimes I dream with my eyes open"

The Monkey: "Why do you say it like it's a bad thing? That's Magic".

shit. schooled by my five-year-old.
Again. 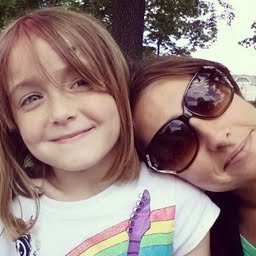