So my friend Aimee found these sweet little kidlet jet packs on Pinterest the week before New Year's Eve.
And Mr. Handsome and I decided we could do that and then some.


So Jet Packs it was.

Kind of awesome, no?
Want to make your own?
They were surprisingly simple and came together really quickly.
The hardest part? Emptying enough 1L and 2L soda bottles to make four jet packs!
JET PACKS


Step 1: Collect, drink the contents of, wash and dry 1L or 2L soda bottles.
We found that the new Coke Zero or Sprite bottles make the most badass looking jet packs by virtue of their streamlined design.  Looking for something a little more retro or Rocketeer-ish? Grab yourself a couple of Big K bottles. Just sayin' 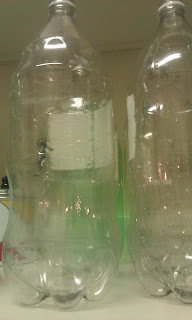 Step 2Spray paint all your bottles silver.
One coat of spray covered everything with a nice, even, totally opaque silver. 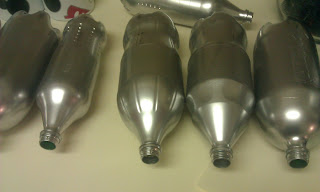 See those great little skinny 1L bottles in the middle there?
They ended up being my favorite. I got the smaller size for The Monkey so she wasn't dragging around 2L bottles on her back...and they had those great dots & indentations that came out so well when spray painted. 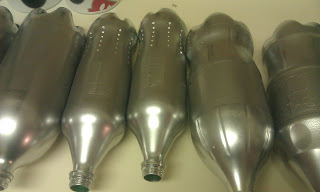 Step 3I didn't snap any photos of step 3. mainly  because I was too busy wrestling with the duct tape.
But we simply fastened two bottles together with a few strips of silver duct tape, then attached several streamers of red, white and yellow into the open ends of the bottles. 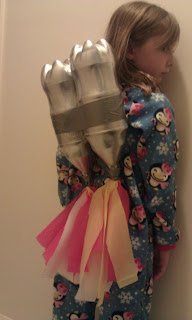 Once the jet packs were assembled, I just took a length of thin elastic I had on hand and made a giant loop, threading it between the two bottles and under the first layer of duct tape, in much the same way you would on a pair of angel or fairy wings. 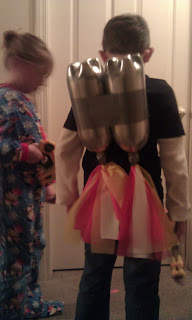 The duct tape held everything secure, and the thin elastic bands were loose enough to allow the kids wide range of motion without knocking the packs around too much.
These things ended up being seriously hilarious and probably my favorite part of the evening.
Jet Packs for Everyone! 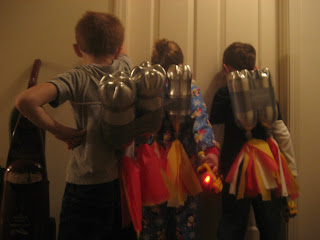