Halloween 2011 ~ It was the year of the all-handmade costumes.
Rock. 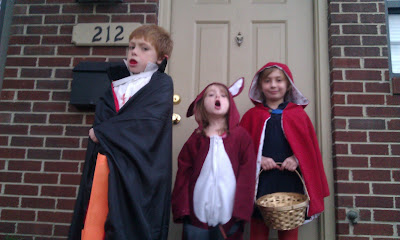 We had a Dracula, a fox, and a Little Red Riding Hood. 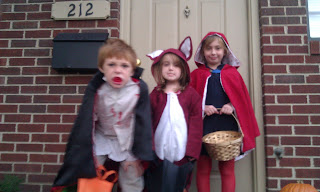 They were insanely short on patience...ready to get out and knocking on doors.
And we don't even get home from the work-school-school round of pickups until 6pm!Thankfully, Nani & Pops swung by to see the kids costumes, take a few pictures, and drop off a Papa Murphy's pizza! So, after their dutiful four bites of pizza and a glass of milk, I cleared them all for Trick-or-Treating. 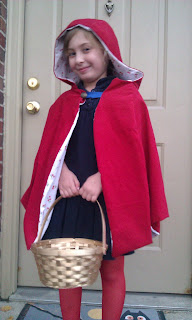 Now for some reason, my kids love the idea of passing out candy.They enjoy the door-to-door aspect of begging for treats too, don't get me wrong, but they have taken great delight in past years in hanging out on the front porch, wrapped around a mug of hot chocolate or warm cider, taking turns handing out treats to later trick-or-treaters. 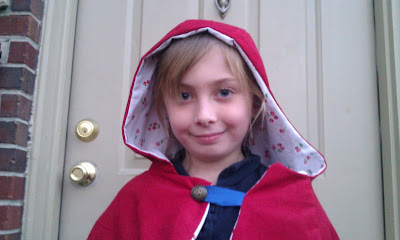 So upon exiting the townhouse this year, we lit the pumpkins and the porch light, but pointedly did not put out a full bowl of candy, hoping to come home to some stragglers in need of end of the night handfuls. 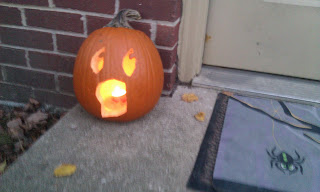 Unfortunately for me (and fortunately for both the kids and our family dentist I suppose) we did not return to the house this year until a full TWO HOURS later. That's two full hours of trudging around the neighborhood, scolding Mr. Man for dashing across streets, holding The Monkey's hand as we neared the overly-decorated porches, re-adjusting The Biz's basket and hood...

Their haul was unbelievable. And I let them keep going mostly because I didn't hear a single. darn. complaint. Not one little whine! until about 10 minutes before I called it quits. Were they giddy? Yes. Were they...overly...enthusiastic? Yes. Were they perfect angels? No. But they so far exceeded my behavioral expectations for the evening I couldn't have been prouder. I heard crisp, clear "Twick or Tweet!"s. I heard immediate choruses of "Thaaaaaank Yoooouuuu" after each stop. I was so proud. 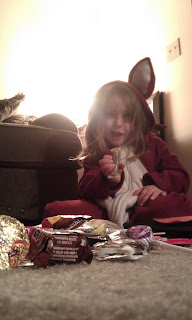 And, of course, as soon as we got home, it was a flurry of upended bags and marking off boundaries of piles with lines of tootsie rolls; and a masterfully OCD-ish display of candy sorting. 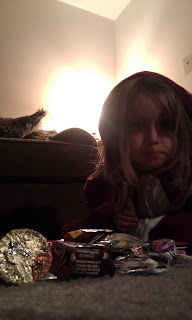 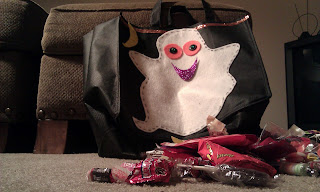 Aren't the bags fantastic? They were all handmade for the kids by my sister-in-law's mom. They were the perfect size for this year's bounty. Those little 99 cent pumpkins just wouldn't have cut it this year! 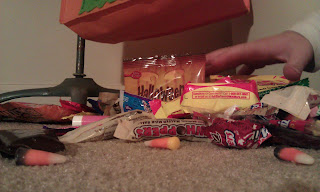 Every time I came close enough to snap a picture of the piles, the kids hovered relentlessly over their loot, like I was going to steal some. Silly Munchkins, they haven't figured out that I steal from them nightly after I tuck them in? 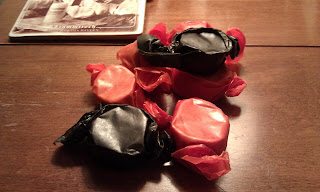 worst. candy. ever. *shudder*
All in all, it was a highly highly successful holiday.