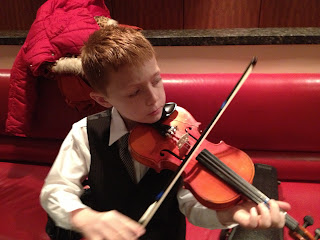 The Munchkins have been diligently practicing beginner violin for a few months now.
and we've progressed from the squeaks and squeals of those early days to some confident bow work. We're not Vivavldi by any means at la casa, but all three Munchkins can play a tune or two error-free. They can tighten and rosen their own bows, they can properly hold, carry, walk with, store and extract their own instruments. And, knock on wood, I have yet to bribe anyone into practicing on a semi-daily basis. Usually just a gentle reminder that it's time to practice is all it takes to have them sprinting for their violins.

That being said, when you dress them in the traditional black and white concert get up, and then hand them off to a bevy of instructors while you go battle it out for decent seats at their first real concert? Your stomach will be doing somersaults. Guaranteed.

It's such a difficult thing, to let your kids stand up in front of others, the possibility of failure hovering just at the fringes of your consciousness. It's hard to let go. To trust that all those hours of practicing has paid off; that they won't stumble on the way to the stage, forget their music, or suffer a massive bout of stage fright at the last minute.

I wonder, at times, if I'm the only parent that suffers these worst-case-scenario nightmares on a daily basis?

How do you know they're ready?
I think that's the question I wrestle with so often these days.
There are times when I forget that The Munchkins are so relatively young. At eight, seven and five they seem so mature when they're not picking their nose or making poop jokes. I heap responsibilities on them that I'm not sure I had at their age because our small, four-person household would not function without them pitching in as equal parts instead of as just dependents. They are as equally responsible for cleaning and dusting and laundry folding and dish cleanup as I am on a weekly basis. And I ask it of them time and time again because it is necessary, hoping each week that it is not going to be the straw that breaks the camel's back, almost fearing each time that I'm dooming them to failure by expecting too much of them...

But on Sunday, The Munchkins, solid and steady as ever, pulled off a flawless performance for hundreds of parents, families, friends, and guests.

I am raising virtuosos...

One terrifying moment at a time. 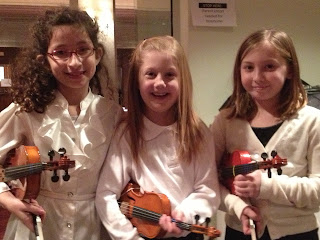 Posted by caralyn at 9:03 PM No comments:

The Monkey was home sick the other day.

The bulk of our day was spend spoon-feeding Tylenol and curling up on the couch trying to sleep it all off. They’re so sad and pathetic when they’re burning up with fever, you know? At one point; however, the girl thought she might be feeling better and requested we do a puzzle. 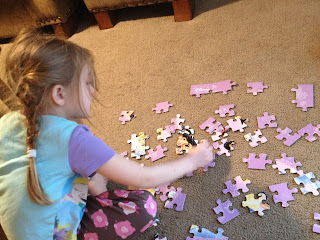 And a good 10 or 15 minutes into putting together a slew of Disney Princesses and Kitty Cats and such, The Monkey half turns to me and says:

“it’s a lot like God, isn’t it?”
“What is sweets? Puzzles you mean?”
“Yep” she replies stoically.
“ Because they’re difficult to put together?”
“No mom,” she replies with a heavy and somewhat disgusted sigh and small shake of her head. “Because there are so many different pieces. I mean. I have one piece and you have one piece and maybe there could be, like, Angel from my class at school that could be helping or something and she could have a piece. You know?”

I just wait…hoping she’ll elaborate if I nod and smile a little
“Because we don’t get to see the picture until it’s all done, but we all have different pieces. And all our pieces look different, but they’re all to the same puzzle.”
Mind. Blown.

My five-year-old just schooled me on religion. 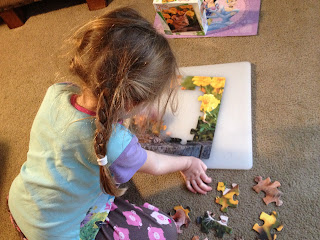 I don’t know why it’s always such a revelation when children say intelligent things. At this point in their development I should be innured to the shock of The Munchkins saying something so completely sensible. Kids just have a different way of looking at the world I suppose. They relate everything back to their level, back to what they know. And I think that, as adults, we try and ‘smarten up’ our statements on life. After attending 12+ years of school and reading thousands of books, I’ve somehow trained myself to think that anything of a philosophical nature that comes out of my mouth better be backed by some research and include some name dropping and citation of knowledgeable sources. And, inevitably, I fall flat on my face, because in this approach, I just make the abstract more abstract. Whereas kids, at least in my experience, make the most sense because they make the abstract more concrete. Kids play with puzzles. God is a puzzle. Got it. Locked down. Moving on. No crisis of faith here, people. She gets it.

And who am I to say she’s wrong? I dig it. God is a puzzle. Makes as much sense as anything I learned in the past 30 years. I need to remember to listen more and assume less… I learn more this way. Especially from my children. 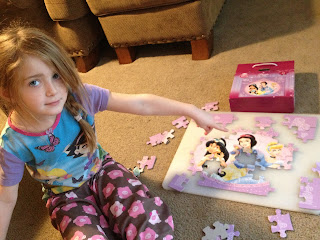