There are few things worse than seeing your kid burst into tears of embarrassment and fear on stage and not being able to do a thing about it. 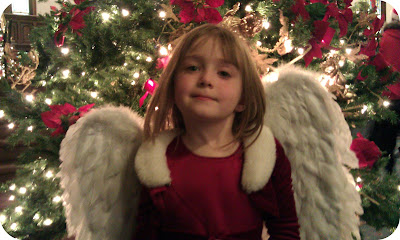 The Monkey is NOT one to suffer stage fright.
No way. No how. That kid is perfectly at home in front of a crowd of people.
She'll go up to perfect strangers in the store and strike up a conversation in the checkout lane.
Which is why I was so taken aback at her tears last Friday.
Poor little monkey... I think she was rather taken aback too.
For the past two months we've been practicing Silver Bells at my house.
For that same past two months we've also been practicing a second, "church song" for The Monkey's big solo...


So, out tromped the Monkey's class Friday, in front of the parents, grandparents and assorted, camera-wielding family members of the hundred + kids in her daycare. She saw me and waved.


Then she saw the rest of her cheering section and grinned a big, fat, cheesy grin.
Her class started singing and she squeaked in with the chorus.
Then, someone handed her the microphone.

She blurted out the first two words of her verse, got a little feedback, got startled, gave a short, whinny of a giggle and then burst into tears.

She seemed so shocked that she was crying that I got a little red around the edges too. What else can you do? She kept looking over at me, all puzzled. Taking those big, hulking, gulping breaths, trying to calm herself down. I could practically hear her thinking "What the HECK, Mom? What happened?".


But, to her great credit she did not budge from her spot.

She sang along with each chorus. Head up, eyes leaking great big crocodile tears.
Every other parent within a ten-foot radius turned to look at me in sympathy. So of course I teared up then. 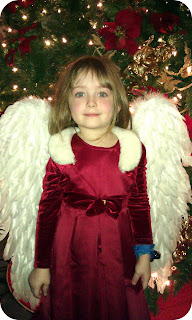 When The Munchkins were tiny, and just learning to walk, we made a point not to rush to their aid and fret over every stumble. It was a conscious effort we made. And it was hard. It was hard for me not to scoop them up every time that they stumbled, but it was good for them.

And it was damn near impossible to hold myself back from rushing toward The Monkey Friday, to hand her a Kleenex or use my thumbs to wipe off the tears spilling out over her lashes and my sleeve to swipe her nose.

But I sat. Despite the semi-reproachful looks from some of the younger kids' parents.

I sat.
And she dealt.
She dealt beautifully. and bravely. and I was so proud.
And afterward...after all the songs and skits and the parade of the babies with jingle bells strapped to their wrists, I barreled back to the wings to tell her so.
I told her I was so proud of her for finishing her song.
I told her what a great job she did for not slinking off stage and for sticking it out, that that's what took guts.
Also? I made her put the wings back on. For a picture. Because that was one cute, snotty little angel.
And, when that snotty little angel has tough times in the years ahead, hopefully she'll remember how proud I was of her for sticking it out even when she'd rather avert her eyes from the crowd. It's those moments that build character. It's those moments that create humanity in each of us. And as hard as it was to sit through it, it's those moments I crave for each of my kids. Because if you can't practice bravery in small increments when you're young, how will you ever know how to do it when it really counts?
Posted by caralyn at 11:41 AM

Email ThisBlogThis!Share to TwitterShare to FacebookShare to Pinterest
Labels: Bravery, The Munchkins