I wrapped up so many projects this weekend I can't even believe it.
Also I can't believe I managed to gift them all away WITHOUT TAKING PICTURES!
ARGH! 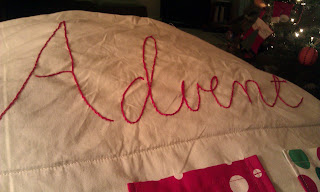 What was I thinking? haha.
Regardless, everything went to good homes.


My sister finally got to take her birthday quilt home to Vermont.

My sister-in-law received six new bibs with fun fabric backed in white cotton-flannel with velcro closures for Mystery Baby M. and a car seat blanket with the softest brown minky on one side (thankyoulord for JoAnn's 60% off coupons!) and a pretty, gender-neutral turquoise paisley on the reverse. 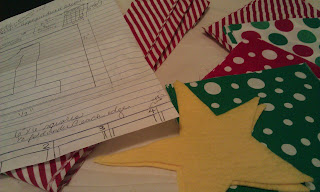 I also finished attaching all the pockets to the Advent Calendar, as well as quilting the whole shebang together & embroidering a portion of the top (some curlicues & holly leaves to come on either side of that)

Isn't the tree nice in the background?

We had such a full, wonderful weekend, with Jane in town & Kelly's shower that it's fairly near a miracle that I got any sewing done at all, and yet, deadlines. Gotta love 'em! 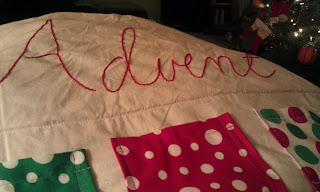 And it was an odd kind of soothing to sit down Sunday evening after The Munchkins were in bed, with some Christmas music on the iPod, the end table light on, the Tree lit up, to sit curled up on the couch and embroider for a spell. I may just have to do more of that... Sooner rather than later...


I'm supposed to be finishing up The Munchkin's Puppet Theatre for the LTTSA over at a little gray  but that project has taken the back burner with all the gifts that had to go out this week! It'll still be finished and under the tree on the 25th, along with some puppets, but it's tricky finding time to work on it when The Munchkins themselves aren't under foot!  If you get a chance, go over & check out all the great finished link ups here