Last Saturday afternoon, the kids were getting squirmy.
I decided there was a dearth of Halloween decor at the house, and they needed something constructive to do before I sent them all to their rooms for pummeling each other. So we made playdough Ghosts and spooky Halloween trees. 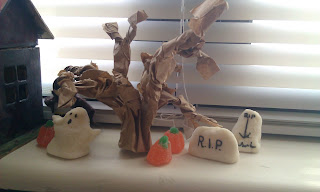 Making your own playdough at home is ridiculously easy.
We just combined a cup of flour, a cup of salt and a half cup of water in a large mixing bowl. Stir until you get a nice uniform consistency and divide evenly between each kid. 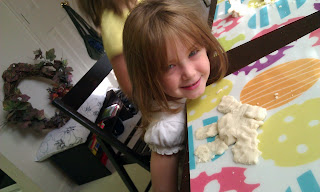 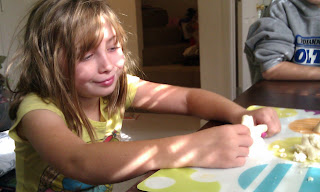 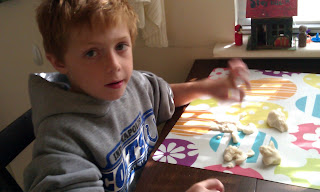 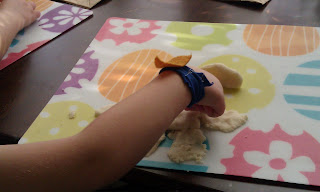 Then we just microwaved the ghosts on a plate one or two at a time for 20- to 30-second intervals until the dough was fairly firm (maybe one& a half or two minutes in total). Be sure to let them sit for a minute before prying them off the plate - those suckers are HOT! 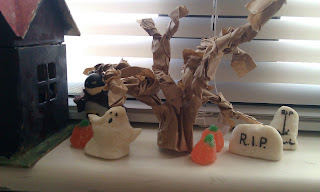 Then, just decorate your ghosts and gravestones with permanent markers! Voila!~ 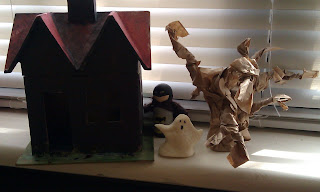 We also tried twisting small, leftover paper bag lunch sacks into spooky trees, but The Munchkins got frustrated with this one, and decided it was best to let momma twist up the trees while they arranged everything to their liking on the kitchen windowsill. 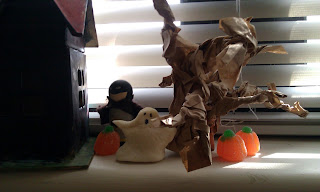 The little pressed paper houses they decorated with a combination of markers and watercolors to make their Haunted Houses. I found the lot of them at Hobby Lobby for about a dollar each. I initially thought they'd make great houses for the Peg People we've been churning out, but the kids decided they needed haunted houses instead. 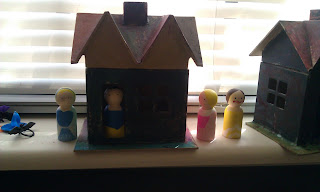 The Monkey's Haunted House still ended up playing home to a slew of princess peg people... 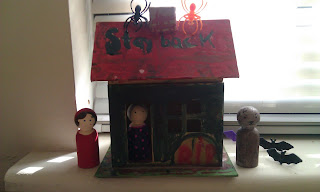 I'm a pretty  big fan of The Biz's (above) The Little Red Riding Hood peg people found a home here. 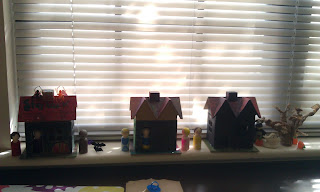 So there you go, an entire afternoon of crafting and painting and sculpting and twisting and gluing and laughing and not pummeling each other. It's a miracle I tell you. Worth every minute of the hour and a half cleanup later that night.
Posted by caralyn at 12:29 PM