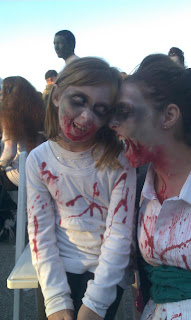 So Saturday was my second favorite annual even of the year!
My first is the Polar Plunge, which benefits the Special Olympics, but the Broad Ripple Zombie Walk is a close second...in fact, with its rapid-fire growth? It may just eclipse into "Favorite". 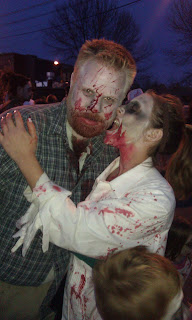 Each year IndyMojo.com partners with local business to host the Broad Ripple Zombie Walk to benefit Gleaners Food Bank. It's a massive 1000+ throng of the undead who shuffle through the main and side streets of Broad Ripple Avenue. with a donation of 10lbs of food you can snag yourself a sweet, limited edition Tshirt, and the satisfaction of doing a little good for your fellow man. 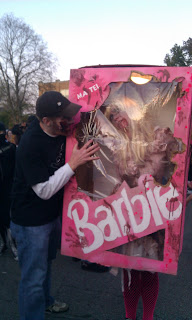 You would be amazed how into this event people get. Makeup has gone from slapdash white and green and red to movie-grade cosmetics and prosthetics. There are people that go NUTS over this. And this year? This year the event not only included the walk, a feast, a prom, and a night of insane music at Tru afterwards but also? A real, live, legally binding wedding. That's right. People got married. In Zombie Regalia.
And guess who got tapped to help decorate the "wedding gazebo"?
Yours truly.
Oh. Yeah. 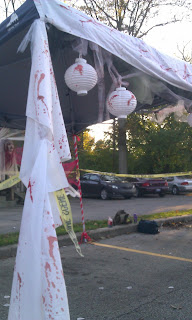 So, a few yards of white material, green and black gauze, hanging paper lanterns, bloody cobwebs, and a bucket or so of fake blood later, and our little pop up tent was transformed (with the help of one brilliant Jen- It's a Pop Up, People!-Smith. xo) 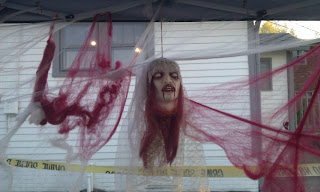 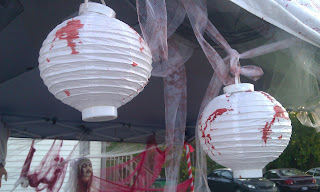 This is also the first year that I've allowed The Munchkins to come along.
Previous years I've held this night in reserve as a grown-up outing. Mostly, let's be honest, so I could run around and be ridiculous. But they'd been begging for two consecutive years now to attend, so I relented. They had a blast. Not one tear, not one worried face at all the gruesome displays, and just a teeeeny bit of whining once we reached the witching hour and they realized they'd been going full-steam ahead and on their feet for hours on end. 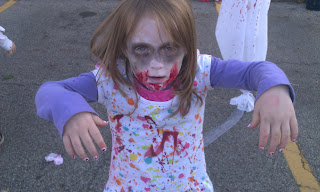 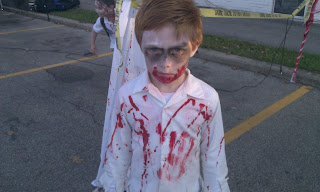 Oh and this year? We raised 5,349 pounds of canned food according to the reps from Gleaners.
For those of you playing along at home? That's over TWO TONS of food for our local homeless.
And our shuffling horde grew to a whopping 1000+ zombies this year.

For an event near and dear to my dark little heart I feel like bragging to EVERYONE.
Look what we can do when we really try, people 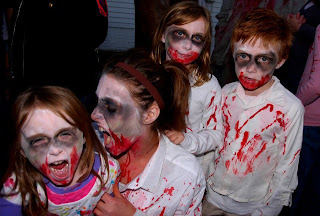 Seriously. Don't you want to be a part of this next year? 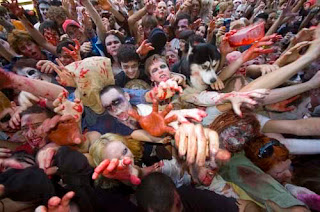