Halloween Prep Round Up

Here's some more Halloween Prep we got taken care of over the weekend! 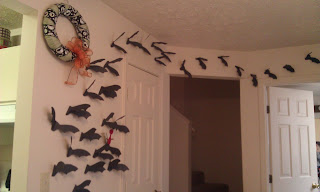 Okay, so, explanation time:
We have the above giant barren wall in our entryway.
Granted, it's not barren now. In fact, it rarely is. I had these grand visions of getting a cozy little padded bench with storage for shoes and such, and maybe a snazzy little portrait or picture gallery...but usually it's just this great blank canvas of a space that gets altered every couple of months (admittedly, usually with construction paper) to coordinate with the season. So the entry way wall now sports this spiffy little yarn wreath, which I already had wrapped and languishing in a corner somewhere. I just added some Dollar Tree Ribbon and Voila! Hallowreath! 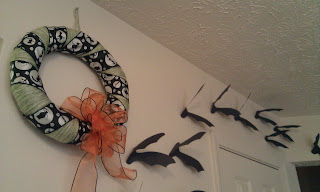 The construction paper bats just sort of took over.
Oops.
Isabelle was down for the count Saturday and the other two natives were getting restless, so I put them to work tracing and cutting out bats. It kept everyone relatively happy for a good couple of hours. Score. 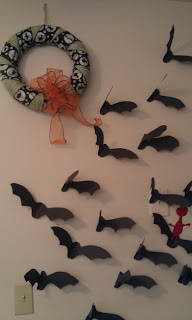 My favorite bit about the wall right now? The One-Legged Red Mummy riding a bad (see above). It's Mr.Man's little addition to the decor. Sophie's was a black blob of construction paper she cut out and stuck onto the closet door. When asked (in the nicest way I could possibly find) just what the heck it was, I got a patronizing look and an eye roll. "Mooo-ooom, it's a Walrus. Get it? WALL-rus?"  That kid is creepy smart. And funny. I got pwned by a four-year-old. 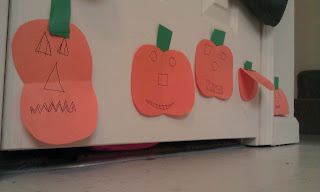 The Monkey is also responsible for the Punkin Patch lining the baseboards all around the entry way and adjoining hallway. I told you they were quiet and busy for a couple of hours! 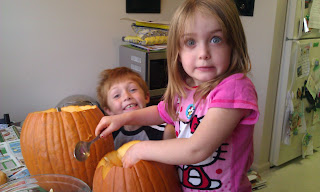 And then...we carved pumpkins!
And by we...I mean me.
Because The Munchkins always seem to love the idea of carving pumpkins, just notsomuch the execution of it all.  I think The Monkey forgot how icky scooping out pumpkin innards can be. 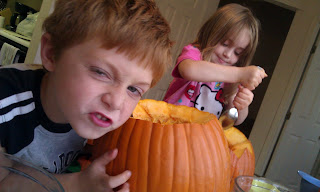 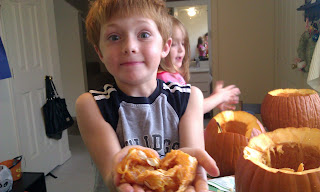 Except for this one! 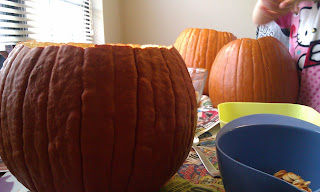 Check out those gourds, baby!
It was a LOT of seeds. Seriously. A LOT. 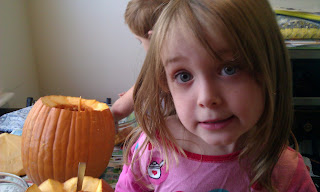 I have no idea what's going on in this picture... 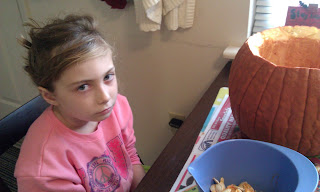 Bell, obviously, still flu-y and not happy about  missing out, decided to sit and watch. Then she promptly went to throw up again. Ew. Poor little Munchkin. 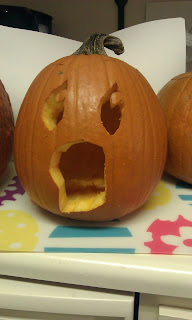 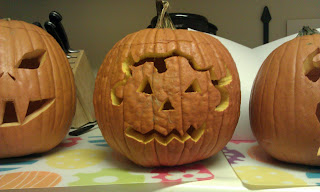 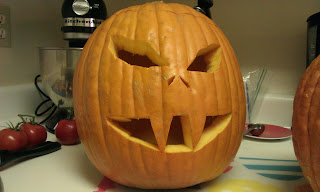 And, after all the decorating and pumpkin carving that went on this weekend, we still had more to do! Since Halloween itself falls on a Monday, there were class parties to prepare for.
*caveat* did you know that in public schools you actually aren't allowed to call them Halloween Parties? Everyone is having "Harvest Celebrations" AND, down to brass tacks, the classrooms themselves aren't even allowed to recognize any Holidays on the calendar at all with the exception of a "Friendship recognition" in February and an "End of the Year" celebration in May. Poor things. 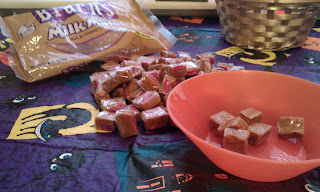 But, YMCA to the rescue!
The Munchkin's Before & After-School care programs were having a monumentally gargantuan Halloween celebration this afternoon. So, the excuse was born to try our hand at Caramel Apples. 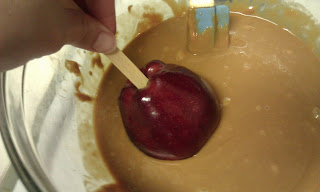 My God, what a pain in the ass these were. Seriously. 30 Caramel Apples later I've vowed to spring the $2 a pop for them next time. It's so worth it.  Don't believe all the blogland divas out there who say whipping up your own batch is a piece of cake! I did. I desperately wanted to believe I could turn out gorgeous, evenly coated apples with a minimum of fuss and muss. But I couldn't. 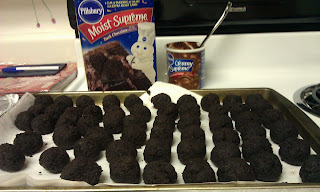 Oh, and don't even get me started on the disaster that was Cake Pops.
Those little boogers just weren't happening. Maybe I'm just a perfectionist? But if it looks more like poop on stick with googly icing eyes? It's. Staying. Home.  I'm not sending poop on a stick in for 20 four-year-olds to giggle at. I have my pride.

So the PreSchoolers got individual treat bags full of tootsie rolls and suckers and candy sticks...and I ran out this afternoon on my lunch hour to replenish the Trick-or-Treating stash. Thank goodness I keep random crap like ziplock trick-or-treat bags on hand! See? Being a pack rat pays off. BooM. 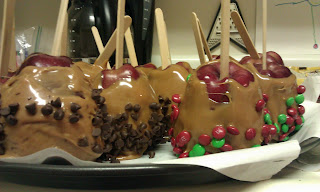 And Biz & Mr. Man, ultimately, after some unique swearing and after-hours drinking by yours truly, skipped off to school with 30 Caramel Apples. 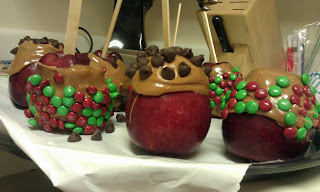 Plus a few extras, because I was already swearing, and drinking, and covered from fingertips to elbows in semi-dried caramel.