We had a picnic last night for dinner. 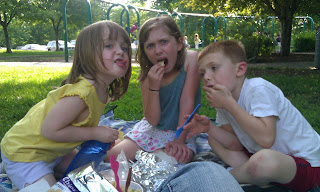 Mostly because I was feeling lazy and didn't want to cook dinner.


So I threw together some sandwiches (on tortillas instead of bread because it's "more funner that way" *cringe*) and some cold pasta salad and a bag of potato chips and some cookies and our water bottles, and we were off.
We hit up Garfield Park, because the tiny hoarde demanded it, and it was a nice change of scenery. And The Munchkins and I lounged on our trusty picnic blanket (which is really due to be replaced, but that I just can't see spending any money on it when I could certainly MAKE something to replace it...Stalemate.)

We ticked off the remaining days of school on our fingers and discussed Isabelle's crush in secretive whispers and planned our weekend in excited tones with words like Parade and Pool and Park. And all around us was the hum and squeal of metal-on-metal swing chains and rubber sneakers on plastic tube slides. It sounded like summer.

And at one point Sophie, my fearless little monkey, found herself on top of a climbing structure shaped like a caterpillar...with 75-some-odd rungs in a roller coaster-esque shape.


I noticed her as she began her descent and I jogged over to spot her, just in time for her to lose her balance and grip. She tumbled about six feet down through and in between the bars and caught herself (albeit on her hip) before she bit the dust completely. I scooped her up and we toddled off the playground, her coughing out huge sobs and me murmuring little inanities and swiping off big dusty tears as they tracked down her face.  I hate it when they hurt. No amount of Wolverine-shaped ice packs or Strawberry Shortcake BandAids can make up for that instant when you realize you weren't able to prevent them from getting hurt. And every time it happens I just want to wrap them in bubble wrap and sit them next to me on the sidelines for a minute. Just for a minute. Just to keep them safe before releasing them out into the wilds of the playground again.

But you know what? just as soon as she'd calmed down, Monkey insisted she had to get right back on the same darn thing.


"Really?" I ask. "Are you sure? Don't you want to slide instead? Or how about the swings? I'll even push you!"
"No, mom. I want to climb"
"But what if you fall again?" I nearly wail at her. To which I get an eyeroll and a quick hand on her hip.
"Mooo-oom. I won't fall AGAIN I've already done that."


And so, back to the caterpillar we go.
Where she successfully climbed it forward and backwards. Twice.
I was properly chastened. Life lesson learned.

Incubating them is the easy part.
Letting them go is so much harder.
Posted by caralyn at 10:37 AM