This month's project for the LTTSA over at a little gray was the Bear Carrier. 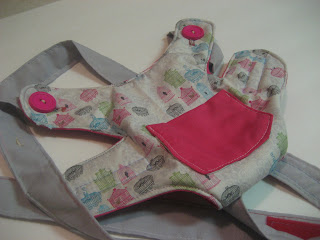 I've got to say that, out of all the projects I've tackled from this book, this one received the loudest cheer when it was finished. The Monkey was simply over the moon at her new doll carrier.  And I was rather over the moon at my successful attempt at Button Holes!!!  I had some extra large and chunky bright pink buttons in my stash (truth be told, all the materials were bits and pieces I'd had squirreled away, so the overhead on this project was a big fat goose egg. Huzzah!) 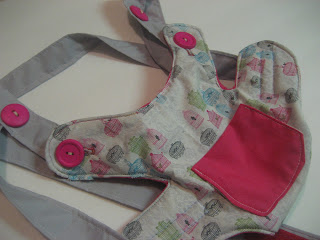 Actually, this is fatbaby 2.0
fatbaby's namesake is currently tucked away in a doll bed on the second floor with a black sharpie The Last Airbender Tattoo covering the top of her head, most of the stuffing in her body leaked out, head more-than-slightly off kilter. The Monkey is rough with her loved ones... 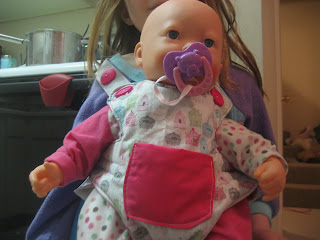 fatbaby 2.0 was a gift from Santa this year. And let me tell you what, Santa had to search eight store in three counties before he found an exact replica. That Santa deserves a round of applause, and a drink, she'd settle for a nice Irish Coffee about now though. 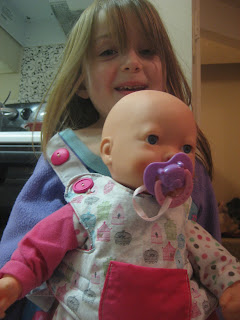 The Monkey is always pretty pleased when I whip out the camera. 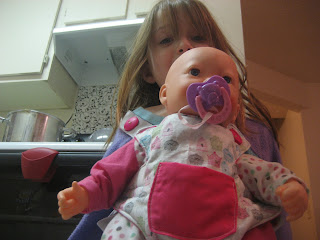 yes, that's a pot of spaghetti on the front burner. No you may not have any. There's no such thing as leftovers in my house anymore. I have three living, breathing garbage disposals these days... God help me when they hit the teenage years... They'll eat me out of house and home for sure.

This is, obviously, her Blue Steel. 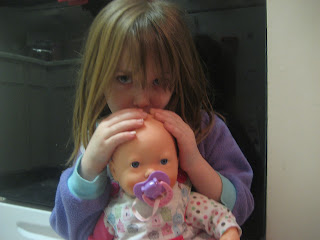 I think it's safe to say this project was a success! 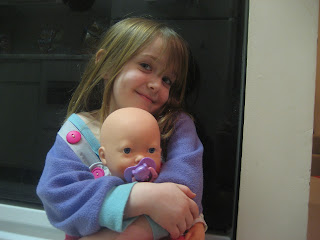 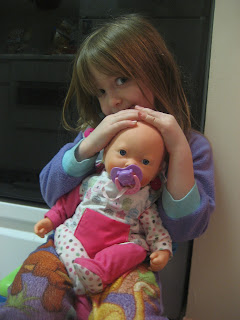 Email ThisBlogThis!Share to TwitterShare to FacebookShare to Pinterest
Labels: A Little Gray, Little Things to Sew, LTTSA, Sew Along