Did you know... When we got back in the car after leaving Jill's house last Thursday, Sophie screwed up her face all confused and concentrating-y asked me "Why did you say 'I love you' to Jill??"  (because i did. I tossed it back over my shoulder as I was herding everyone out the front door, like I always do, automatically, without hardly thinking about it any more.) 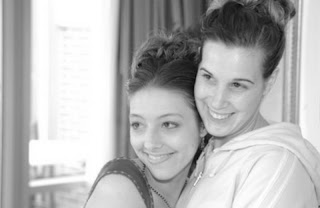 And so I had to explain to Sophie...and then repeat it multiple times for Isabelle & Baz to hear (because they are of an age where they like nothing better than to hear stories from when I was a kid) That I said it because I had, in fact, known all of those girls for nearly as long as I could remember back. I explained that they'd been my friends since I was Sophie's age! (four) And they all gasped and said "No Way!" I had to explain that Jill & I attended Rainbow Learning Land preschool together and that we were the only two girls in our entire class (a fact we take great pride in, by the way). I explained that Stephanie and I were cheerleaders together when were just a little older than Isabelle. That we wore white sweaters with green appliqued Ms on them, and kelly green and white pleated skirts and side ponytails together on Saturdays when our  brothers played football and soccer. I explained that Karrie & I ran back in the neighborhoods together for track practice in high school, and that she was my first non-family member roommate, and that we lived together in college and burnt popcorn and green plastic plates together; and had unnatural obsessions with foreign college soccer team members together. 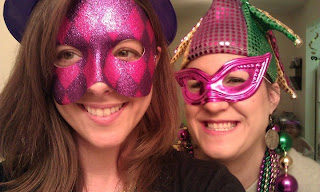 I had to explain that I said "I love you" to these girls that night, and every time I talked to them on the phone or in person, for the exact same reason that I said it to their Uncle Tony or their Aunt Jane or their Uncle Vinny. I said it because those girls are my family, but it was a special kind of family that I got to choose for myself... And then it dissolved into discussion about families and different kinds of families and that the important thing about a family was love...and then Sebastian mentioned one of his friends had two mommies and how did that work? ...and well...it all just sort of deteriorated from there.
But anyway.
Point being.
Love you guys. 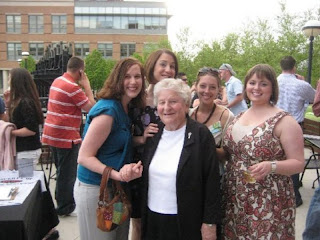