You know that look in your kid's eyes when you do something that thrills them?
It's better than caffeine, that burst of joy somewhere in the center of your chest, when they're hopping up and down on not-so-chubby-anymore little legs, excited about something you've made...


It's funny, how much I still seek the approval of others, even at my age. And how the approval  of a four-year-old can make or break my day.


Last night I finished up (mostly...don't mind the unfinished collar and ears that need to be reinforced there folks, nothing to see there... move along...move along) The Woodland Fox test pattern for Jessica of Running with Scissors. 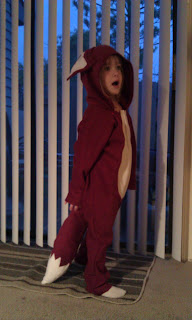 
I volunteered (and got picked!) to help test one of the three. 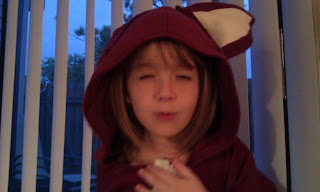 Jessica's blog, by the way? I swoon over it. Daily. Go visit.


But this fox costume, honestly, could not have come at a better time.


Randomly early last week The Monkey looked up at me out of the blue and says "Momma, I know what I wanna be for Trip-or-Treating... I wanna be an animal like a fox...or a giraffe...but mostly a fox"


I'm sorry...WHAT? As of two days prior I thought she wanted to be Bat Girl?  And before that she was insistent on being Rapunzel... That kid...oy.  So, Fox it is! If only because I could readily get my hands on the pattern. (hooray for pattern testing!) 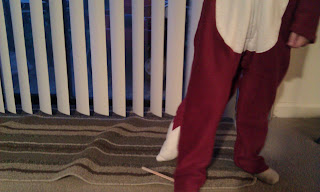 And I'll admit it, I work best under deadline. I know this about myself. So knowing I had a little less than a week to get this sucker put together helped me map out a timeline (one night for printing & assembling the pattern, one night for transferring the pattern to freezer paper and cutting out my fabrics, three nights for assembly and viola!)

I'm pretty darn proud of myself. 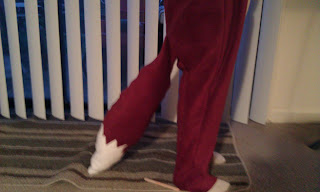 No...that's certainly NOT a popsicle stick on the floor near her feet. What kind of mother leaves popsicle sticks just lying around like that...you're seeing things...

And Sophie was in awe. 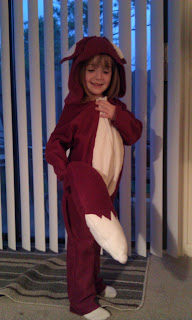 I finished it up (mostly. hush) late last night and it was on the back of her chair this morning at breakfast. She promptly stripped down, put it on and went leaping about the living room, howling at the top of her lungs. 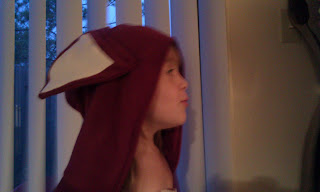 That kid's a trip. 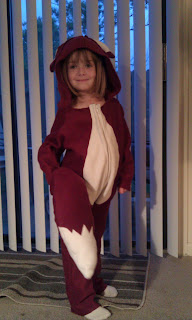 Now the other two want costumes.


What have I gotten myself into?


Thanks again, Jessica for letting me help test this one out - it was a real treat!!