So I ran to Kmart on my lunch break because I needed, among other things: milk, donuts & trashbags. And this sort of thing is best done on my lunch hour rather than with three small munchkins in tow.
(this is the least interesting part of my story)

While there I found myself stuck behind a slow-moving human barricade of flannel and fun.
Three men built like WWF wrestlers were shuffling up the aisle in front of me, all of us headed to the check out lanes. There was no way around them, the store being ridiculously busy for noon on a Wednesday.
Two of the three man mountains wore flannel, all three had mullets. It was one of those moments I would have given ANYthing for a camera phone. Several times during the slo-mo-shuffle they stop. for NO apparent reason other than to ogle the 35% off Seasonal decor.
So, finally, after several unsuccessful attempts to alert them to my presence hot on their heels (coughs, ahems and muffled sneezes to no avail) I say:
"Excuse me."
"Excuse me?"
"Excuse me! Sir! Can I slip by you please?"
They all three turn around as one.
SO not a group of men.
So SO SOOOOOOOOO not a group of men.
I was mortified.
I mumbled an apology and very literally turned tail and RAN down the aisle, afraid the three largest women I'd ever seen were going to chase me down and beat me up.
My face still flames hot & embarrassed just thinking about it. 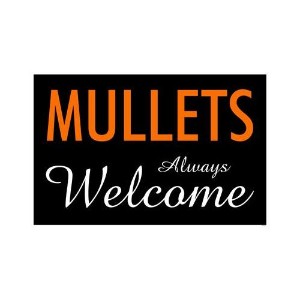