LoLLaPaLooZa: Trying to be Original... Just Like Everybody Else

This year's LoLLa lineup read like a who's who of up and comings rather than the powerhouse of glory bands it seems to have been in years past, and I couldn't have been more ecstatic. On the whole, it contained more pasty UK dudes than a British soccer match. The North Field corralled the Bearded Masses with Love-in session acts like Bon Iver, Fleet Foxes, The Decemberists and Andrew Bird. The Citi Stage was a Pitchfork Addicts wet dream all weekend with acts including The Knux and Amazing Baby on Friday; Chairlift, No Age & Lykki Li on Saturday; and Gang Gang Dance and Deerhunter on Sunday. Can you say hipster heaven? And the South end of Grant Park housed the we're-too-cool-to-admit-we-like-them anti-establishment groups: Depeche Mode, Tool, Ra Ra Riot, Vampire Weekend (admittedly one of my favorites!) Snoop and The Killers (damn, Sunday would have been a good day to go...)

Despite being soaked to the bone 10 minutes after arrival, there are definite benefits to having attended the Friday Festivities:
1) It wasn't 100+ degrees in the shade
2) You don't need a more legitimate reason to skip out of work on a Friday than this
3) The Bands (as a whole) were better Friday than any other day of the weekend
4)Port-a-potties were not yet filled to the brim with three days of urban-hipster poo

We were all cold, soaked and overpaying for cheap, crappy beer. But $2 can koozies made it all seem okay. I learned (among other things) the correct lyrics to every Ben Folds song played. I won bets in line for the port-o-lets, and I bore witness to two of the most awesome trades in human history: (1) Bartering swaths of TP for line jumping priveleges at the port-o-lets. *note The only thing that trumps a swath of bartered TP is the girl at the front of the line who brought her own baby wipes. It was a showdown at high noon, I tell ya. (2) Trading one Werther's Original (noted a fine, fine candy indeed by all parties involved) and two lifesavers mints (pocket lint intact) for a quick pull on a fellow concert-goer's smuggle whiskey.

And now, for your general edification, some Do's and Dont's of LoLLa...
DO: Knee-high Rain Boots, Multi-Colored Chucks, Retro 1980's Shades (preferably the slatted kind), White White Wedding Dresses (if you're a member of The Decemberists otherwise you'd just look silly), Sporting this year's Lolla shirt (apparantly this is one of the few venues where this is generally acceptable practice. Usually you'd receive a beat down, or at least scathing, haughty looks for doing this), Sued Buckskins. Seriously. Or dressing like Pocahontis.

DONT'S: Sundresses, Hemp Sandals, Gladiator Laceups, White T, no Bra (ew. just. ew.), Plaid camp shirts (In this girl's opinion, this look was cool for about 30 seconds, but when you're trying to be original, just like everybody else, it's suddenly trite and overdone), Rompers (Really? REALLY?!! How do you expect to navigate a port-a-potty in that overgrown onsie with a 24oz. beer in one hand and your park map in the other?)

I tease. I kid. But secretly I was in heaven.
I'm already plotting to go all three days next year.
I've started my paper chain countdown, have you? 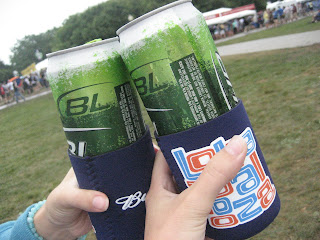