Remember this little number?
For a little gray's Little Things to Sew-Along last October?
Well, it was a huge it... especially with The Monkey. She's been wearing her sister's cape around non-stop the past week or two. It's caused no end of spits and spats around the house (like they need another reason to argue amongst themselves?) 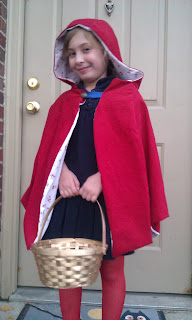 Well, I was cleaning out my stash last night, in preparation for another project, and found almost two yards of the most beautiful moss-green, small wale corduroy that I  didn't even remember buying! It's like finding money in your pocket. I might have done a small little happy dance.
And so, this weekend, The Monkey will have her own cape to run around the house in. Which means I may forgo the Explorer Vest this month, in favor of a second cape. Or at least push the explorer vest back a week. 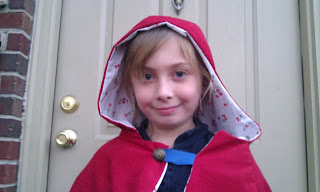 I'd forgotten how well a deadline motivates me.
Posted by caralyn at 9:54 AM