Prior to the sewing machine being back and fully operational, I got a little bit stir crazy.
And, without the machine, I had to resort to *gasp!* hand-sewing! 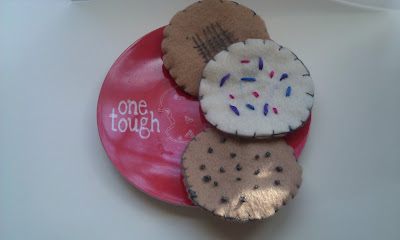 To say that The Monkey has been obsessed with play food lately would be a gross understatement.
Santa had brought a ton of felt food from Ikea last Christmas, and it gets used daily. This is not an exaggeration. I cannot recall a day in the last month that I've not had to sit down at some form of tea party or restaurant booth so she could take my order.
Daily. 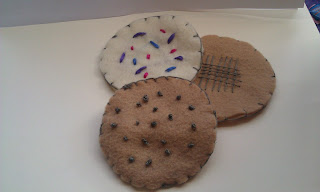 So Saturday we were all hunkered down and healing up and watching movies sprawled out on the living room floor when The Monkey pulled out some felt out of my stash (because they like to go through it occasionally and steal bits and pieces for play). I think originally they were going to be placemats for her game, but I immediately had other ideas. 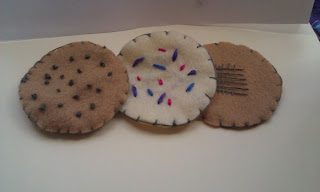 I traced around one of the kids' plastic tumblers for a good size, and made a cookie 'sandwich' with two pieces of felt and some fleece I had on hand.  I used some thick brown embroidery floss to do a  quick blanket stitch around the exterior of the cookies, and smaller threads of the same to do the fork-cross-hatching on the peanut butter cookie and the french knots/chocolate chips on the Chocolate Chip Cookie. The sprinkles on the sugar cookie were dictated by The Biz & The Monkey.  I knocked the first three out in half an hour or so...and The Munchkins are now anxiously awaiting the next installment.
Mr. Man wants a turkey (hah! Tutorial....found!)
The Biz wants breakfast food (Thank you, Erin! I'm all over that bacon & these cinnamon rolls and these blueberry muffins)
And The Monkey, of course, wants more cookies. 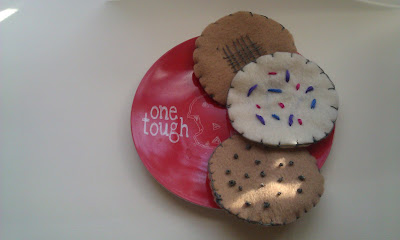