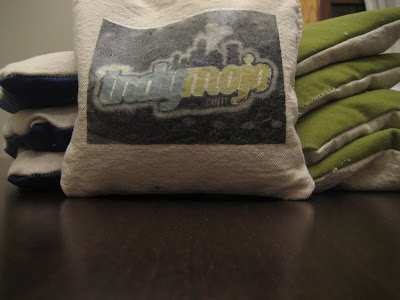 Due to a FailStock Theft...
an unnamed man was left sans bags for his cornhole set.
Since I had nothing better to do...

CornHole Bags.
Materials:
Eight 7 x 7 squares of duck cloth
*note - you apparently cannot buy duck cloth @ JoAnn Fabrics without every bluehair that works that nodding and asking "Ahhh... cornhole bags?".
Heavy duty thread
*note - i'm not kidding - these things take a beating!
Fabric Glue
Feed-Grade dried corn
*NOT popcorn. Although plastic pellets can also be substituted in a pinch or for the non-purists. Most people like the feel of, and the dust created by, the use of dried corn. Hence the name of the game... 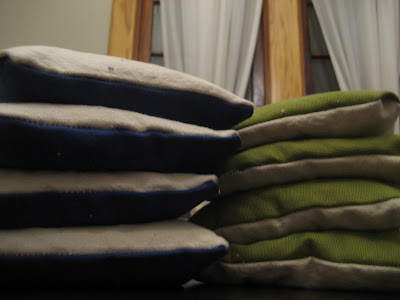 Step 2. Sew it Up
Stitch three of the four sides usuing a 1/2" seam allowance.
Use your fabric glue to glue down the remaining 1/2" flaps near the seams. This will ensure that your bags resist bursting.
Once your glue is dry, turn those babies right-side out.

Step 3. Full to Bursting
According to most literature I found, bags should be 16oz. Your fabric's going to weigh about 1/2 an ounce, so take that into account. Easiest thing is to beg/borrow/steal a kitchen scale for exact measurements.
*note - a FUNNEL is a biiiiiig help here.

Step 4. Final Jeoparody
Toughie. That corn/filler has a mind of it's own. Those little buggers do NOT want to stay put. Pinning the seam is a pain in the rear. I suggest double stitching with a running stitch to keep the fourth side closed, then a whipstitch over the top. It's not pristine, but it's secure! 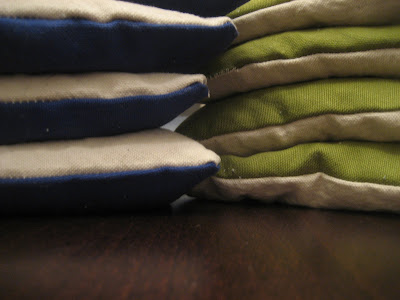