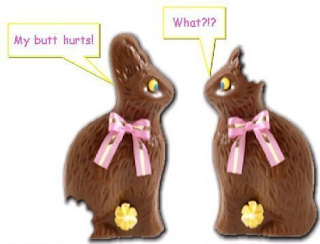 I’m not goinng to try and put this in my own words...because it would fall somewhere along the lines of all the worlds religions stemming from one basic...blah...blah...blah... Here - just read this article yourself:

And, for the patently lazy...here it is in raw text... Happy Easter everyone!!!

On Friday more than a billion Christians around the world will mark the gravest observance on their Calendar, Good Friday, the day Jesus died on the cross. (To be followed in two days by Easter Sunday, to mark his Resurrection).
But unlike some holy days — say, Christmas, which some non-Christians in the U.S. observe informally by going to a movie and ordering Chinese food — on this particular Friday, March 21, it seems almost no believer of any sort will be left without his or her own holiday. In what is statistically, at least, a once-in-a-millennium combination, the following will all occur on the 21st:

Purim, a Jewish festival celebrating the biblical book of Esther
Narouz, the Persian New Year, which is observed with Islamic elaboration in Iran and all the "stan" countries, as well as by Zoroastrians and Baha’is.

Eid Milad an Nabi, the Birth of the Prophet, which is celebrated by some but not all Sunni Muslims and, though officially beginning on Thursday, is often marked on Friday.

Small Holi, Hindu, an Indian festival of bonfires, to be followed on Saturday by Holi, a kind of Mardi Gras.

Magha Puja, a celebration of the Buddha’s first group of followers, marked primarily in Thailand.

"Half the world’s population is going to be celebrating something," says Raymond Clothey, Professor Emeritus of Religious studies at the University of Pittsburgh. "My goodness," says Delton Krueger, owner of www.interfaithcalendar.org, who follows "14 major religions and six others." He counts 20 holidays altogether (including some religious double-dips, like Maundy Thursday and Good Friday) between the 20th (which is also quite crowded) and the 21st. He marvels: "There is no other time in 2008 when there is this kind of concentration."
And in fact for quite a bit longer than that. Ed Reingold and Nachum Dershowitz, co-authors of the books Calendrical Calculations and Calendrical Tabulations, determined how often in the period between 1600 and 2400 A.D. Good Friday, Purim, Narouz and the Eid would occur in the same week. The answer is nine times in 800 years. Then they tackled the odds that they would converge on a two-day period. And the total is ... only once: tomorrow. And that’s not even counting Magha Puja and Small Holi.
Unless you are mathematically inclined, however, you may not see the logic in all this. If it’s the 21st of March, you may ask, shouldn’t all the religions of the world celebrate the same holiday on that date each year?
No. There are a sprinkling of major holidays (Western Christmas is one) that fall each year on the same day of the Gregorian calendar, a fairly standard non-religious system and the one Americans are most familiar with.
But almost none of tomorrow’s holidays actually follows that calendar. All Muslim holy days, for instance, are calculated on a lunar system. Keyed to the phases of the moon, Islam’s 12 months are each 29 and a half days long, for a total of 354 days a year, or 11 days fewer than on ours. That means the holidays rotate backward around the Gregorian calendar, occurring 11 days earlier each year. That is why you can have an "easy Ramadan" in the spring, when going without water all day is relatively easy, or a hard one in the summer. And why the Prophet’s birthday will be on March 9 next year.
Then there is the Jewish calendar, which determines the placement of Purim. It is "lunisolar," which means that holidays wander with the moon until they reach the end of what might be thought of as a month-long tether, which has the effect of maintaining them in the same season every year.
Good Friday, meanwhile, like many of the other most important Christian holidays, is a set number of days before Easter. The only problem is that the date of Easter is probably the most complicated celebratory calculation this side of Hinduism, which has a number of competing religious calendars. The standard rule is "the Sunday after the first full moon on or after the day of the vernal equinox." But in fact, the actual divination of the date is so involved that it has its own offical name: "computus." And so challenging that Carl Friedrich Gauss, one of history’s greatest mathematicians, devoted the time to create an algorithm for it. It goes on for many lines. You can look it up. And, of course, it doesn’t work for Eastern Orthodox Easter (about one month later than the Western Christian one this year, on April 27).
So, should we celebrate all these celebrations? Yes, says William Paden, the author of Religious Worlds: The Comparative Study of Religion and a professor at the University of Vermont — at least to the extent that we revere the drive to carve out sacred time in the middle of the day-by-day profane. "Each of these religions is creating its own world, with its own time and space and memory system," he says. They recognize what’s of real value, and they encode it, and it forms an architecture of memory." Yes, says Bruce Lawrence, the head of Islamic Studies at Duke University, who was invited to speak at a nearby synagogue when the beginnings of Rosh Hashanah and Ramadan happened to coincide last year.
But be cautious, since human nature is as fickle as coincidence. "When one group is grieving and one is jubilant there are some unfortunate tensions," says Anand Kumar, with the Centre for the Study of Social Systems at Jawaharlal Nehru University in New Delhi, a city with considerable experience with multiple faiths. Such conjunctions have led to conflicts and even riots, not just when moods clash, but because "the public sphere is being contested." Kumar is convinced, however, that "a new generation is emerging that is more pluralistic and they don’t feel threatened just because someone is from another religion."
And that will be what this writer meditates on this Friday.